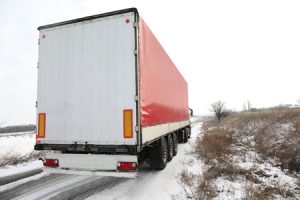 Israel Hernandez was a garbage truck driver up north, but wanted to get out of the cold, snowy winters so he moved to the south recently.

While down south, he trained to be a long haul truck driver whereas he’d travel the southern states delivering various loads. So far, so good– he has been to places like Louisiana, Georgia, and the Carolinas, and he still hasn’t needed his winter clothes.

That said, Hernandez noticed his schedule involves 12 days of steady travel, so he can’t be “home” in Orlando for long periods of time. A lot of truck driver’s experience this– they’re always away from home, or at least it seems like that. Now Hernandez is single so he doesn’t have a wife and kids to worry about– and that makes the job easier. Still, the life of a trucker involves making sacrifices. Hernandez would probably like to be at Disney World most days, but he has a job to do, and he’s doing it well.

During this holiday season, we should all be thankful for truck drivers like Hernandez and the millions of others who have to be away from home… even on birthdays, holidays, etc.

Think about this: holidays wouldn’t happen without truckers. They’re the ones who deliver the food to your local stores, including things like turkeys and potatoes.

Come to think of it, you wouldn’t have a roof over your head without truckers. They’re the ones who deliver the lumber and insulation to build homes in various places.

What about the clothing you wear? It doesn’t just magically appear at the local mall or Wal-mart. It got there thanks to truck drivers who brought it, in boxes, from faraway. Indeed, most of what you wear was once on a truck somewhere!

Have you ever stayed overnight at a hospital? Truck drivers are responsible for helping hospital stay stocked with needed supplies to ensure your health and safety while there.

Finally, another reason to be thankful for truckers this holiday season, and always, is that they make charitable contributions to those in need. When disaster strikes, things like food and water get delivered by trucks. And truckers raise money for organizations like the Special Olympics.

The next time you see a truck driver, say “thanks.” They’ll appreciate it!

If you’re looking for a dependable truck driver, request one from Platinum Drivers today.

← What Can Truck Drivers Do to Stay Warm at Night?
Here’s Why More Women Are Drawn to a Truck Driving Career →