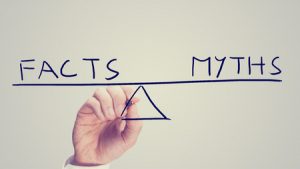 There are more than 10 million people working in the trucking industry at the moment. Nevertheless, the industry is always looking to add new drivers. They’re especially interested in doing it right now since there is a shortage in the number of truck drivers scattered across the country. Would you like to help fill the void? If so, you should learn the truth about becoming a part of the trucking industry before you do it. Here are some of the myths that so often surround it.

Myth #1: It costs a fortune to become a truck driver.

One of the things that stops some people from becoming truck drivers is the perceived cost of going to trucking school. But it’s not anywhere near as costly as you might think. Truck driving school costs way less than most other types of school and can be completed in a matter of just weeks, not years. Research some trucking schools in your area before you shoot down the idea of attending one.

Myth #2: Truck drivers spend all their time out on the road.

Some truck drivers spend almost the entire year out on the road. They drive from coast and coast and have the time of their life while they’re doing it. You can join them if you want, but you don’t have to do it. There are plenty of truck drivers who drive locally and spend every night at home in their own bed. It’s up to you to decide how long you’re comfortable being away from home.

Myth #3: You can’t turn into a truck driver without a perfect driving record.

Trucking companies do prefer hiring drivers with perfect driving records. But many of them are also open to hiring those with blemishes on their driving records, depending on the circumstances. It’s not always to get hired as a trucker when you have something like a DUI on your record. But you shouldn’t dismiss the idea of becoming a trucker simply because you think your driving record will prevent you from doing it. As long as you’re open and honest about it, many companies will look past your record if you’re a good and reliable driver.

Interested in driving trucks for a living? Platinum Drivers can provide you with the resources you’ll need to be a successful trucker. Call us at 844-800-1421 today to see what we can do to give your new career a big boost.