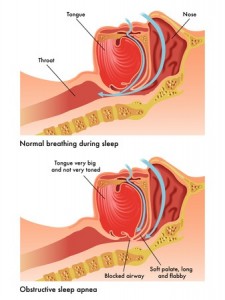 When driving a big rig over roads, you do not want to fall asleep, right? Sleepy drivers should know that the federal regulators are considering new restrictions for truck drivers who have sleep apnea, a condition where a person reduces or stops breathing during their sleep.

Sleep apnea involves repeated episodes of upper airway collapse in the region of the upper throat resulting in partial or complete airflow obstructions. In other words, you’re trying to sleep but you gasp for air or feel like you’re choking. A person with sleep apnea may also snore, a lot. Oftentimes, people who are overweight deal with sleep apnea, and when it’s untreated it can make them very tired during their waking hours. Therefore, truck drivers with sleep apnea may be more likely to fall asleep at the wheel and cause accidents or even deaths. Now you see why the feds are thinking about adjusting rules.

Here’s the deal: for those with sleep apnea, eight hours of sleep can be less restful or refreshing than four hours of ordinary, uninterrupted sleep. Federal agencies are concerned that drivers with the condition have potential consequences for safety. They’re particularly worried about those in safety-sensitive positions. The idea, then, is for truck drivers who suffer from sleep apnea to possibly be required to seek medical treatment.

Truck drivers who have sleep apnea and aren’t being medically treated for it could end up having attention deficits, trouble concentrating, and problems with both their memory and situational awareness. The National Transportation Safety Board determined that sleep apnea has played a role in several accidents involving motor carriers as well as trains.

One horrific accident occurred back in 2000 when the driver of a tractor-trailer traveling on Interstate 40 near Jackson, Tennessee, collided with a Tennessee Highway Patrol vehicle trailing construction vehicles, killing the state trooper inside. If that wasn’t bad enough, the tractor-trailer then traveled across the median and collided with a Chevrolet Blazer heading in the opposite direction, seriously injuring the driver of the Blazer. The driver of that accident-causing truck had unreported sleep apnea.

You might have sleep apnea and not even know it. Whether you know you do or not, one thing’s for certain: if you’re going to be in control of a big rig barreling down the highway you do not want to cause a crash because you fell asleep at the wheel.

Prepping for any type of test is never easy, and most of the time it’s more strenuous than not. Prepping for something like a driver’s license, however, can be a bit more frustrating because of how important it is to a person’s personal or business life, especially in terms of a CDL or commercial driver’s… END_OF_DOCUMENT_TOKEN_TO_BE_REPLACED

Truckers depend on having their CDL (commercial driver’s license) in order to make a living, feed their families, and have somewhere to go every day to work and get paid. What happens to your CDL if you get a DUI? Unfortunately, you get your CDL suspended for one year for first time offenders. If it’s… END_OF_DOCUMENT_TOKEN_TO_BE_REPLACED

The average person doesn’t know how to drive a bus or a big truck with double or triple trailers. They also don’t know how to handle trucks with tanks or hazardous materials. They go about their lives with their state driver’s license, going to school, the mall, and other places around town in their Chevys,… END_OF_DOCUMENT_TOKEN_TO_BE_REPLACED