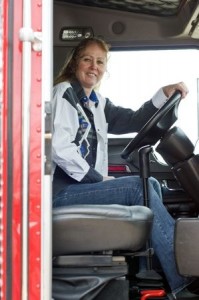 Freight truck driving is currently the occupation of millions of Americans. Thousands and thousands of companies have trucks that require drivers and other employees to complete the job. Although millions of Americans take up this occupation, there is still a shortage of drivers in this day and age. Most of the people involved in this profession are men; so one way to increase the amount of drivers in the U.S. would be to increase the recruitment that goes to women. If women are better informed of what opportunities could be given to them through this occupation, they may be more likely to partake in this career.

When women began to immerse themselves into the trucking industry, they were slightly shamed away because of the abnormality of the mixture of gender/occupation. Many male truck drivers and companies would think lesser of the women, think they belonged anywhere but behind the wheel of a gigantic truck, and that they were incapable of doing such tasks that a trucker must do. Overtime, as women became more adapted to the professional world and workforce, women truck drivers slowly became more common and less frowned upon; women are now being recruited to be truck drivers because of the shortage. Though a career in trucking may be difficult for a woman and especially for a woman with a family, women are still becoming more involved in this occupation. Looking to women who are willing to partake in this career may be just what we need to solve the truck driver shortages that we are now facing.

Platinum Drivers is a truck driver placement agency that hires professional truck drivers who are ready to work. They match the professional drivers with tasks they are given that will best benefit them and their talents

Drivers, to learn more about how they can help you help you with your career, please visit their Driver’s Page.

Transporting freight by truck is still very important to our economy. Many of the goods that our stores and homes house were delivered by truck. The most crucial aspect to trucking are the drivers. Trucking companies put a lot of responsibility upon their drivers to successfully and safely carry freight all over the country. However,… END_OF_DOCUMENT_TOKEN_TO_BE_REPLACED

This topic is old and worn out, but as a driver staffing agency, we know that it’s also one that’s always changing. As truck stops age, they tend to get worse (though some have retained their attraction throughout the years). As new stops open, some are met with applause while others are left with boos.… END_OF_DOCUMENT_TOKEN_TO_BE_REPLACED